Gathering Cyber Threat Intelligence data is fairly easy, especially OSINT. There are so many feeds out there that will stream IOCs to your aggregation platform that you will most likely be overwhelmed with a mix of high and low fidelity intelligence. 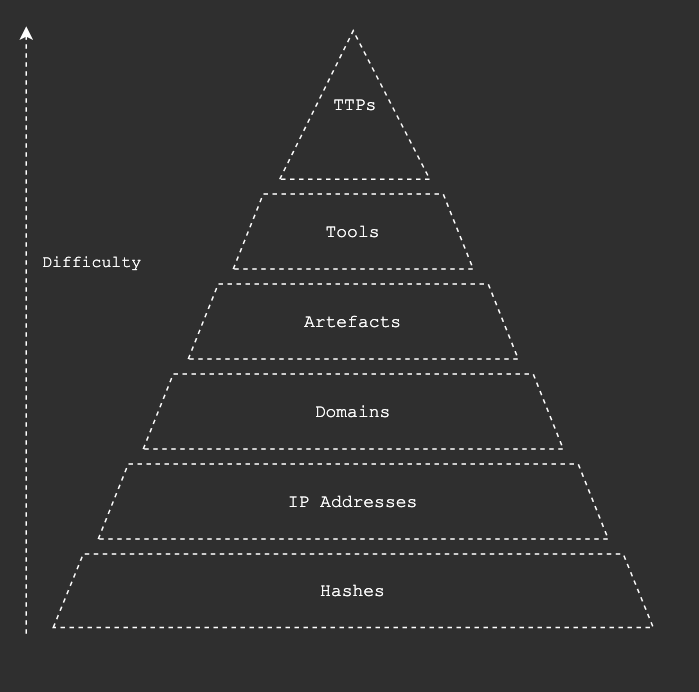 When we think about the Pyramid of Pain by David Bainco ingesting huge amounts of malicious hash values is not a big deal, these malicious hashes won’t change and so collecting them and pushing them to detection technologies isn’t particularly taxing. However this comes with a caveat, as malware has become more polymorphic in nature, we can’t rely on collecting out of date hashes for malware samples.

Similarly, IP addresses get re-assigned and as more cloud services and virtual hosts are used mean that false positives are almost guaranteed.

As we move up the pyramid the indicators become harder to collect, correlate and apply to security tooling.

We can therefor predict that the volume of data collected for each rung can be represented by the rung’s size, potentially millions of hashes and a few hundred TTPs for example.

Introduction to the CODE Model

The CODE model is a framework that can be used to help Security Operations make sense of the wealth of Threat Intelligence data available to them.

This is where most of the front-loaded effort comes in, selecting good quality sources to suit your environment is the difference between high quality alerting and enrichment and one to two hundred alerts with 80% false positive rate.

Create a knowledge base to store findings, IOCs and aggregate feeds. There are many great OpenSource solutions for this such as MISP and OpenCTI.

I will write some posts going into more detail on this in the future.

This phase is where all of the data collected is distilled down to something more manageable, something that can answer the ‘why should we care about this’ type of questions and building structures with the data, such as mapping your collected information to TTPs and Adversaries, which can be used for threat hunting.

The main objectives here are to:

The final part of a well integrated threat intelligence operation is communicating your findings and providing concise and actionable information where it is needed.

I hope this brief introduction into the high level outline of how I think about operationalising cyber threat intelligence proved useful. I will continue to write posts about these concepts in greater detail with some more tips and great open source tooling that can be used at any level of maturity.